A meaningful connection that lasts decades 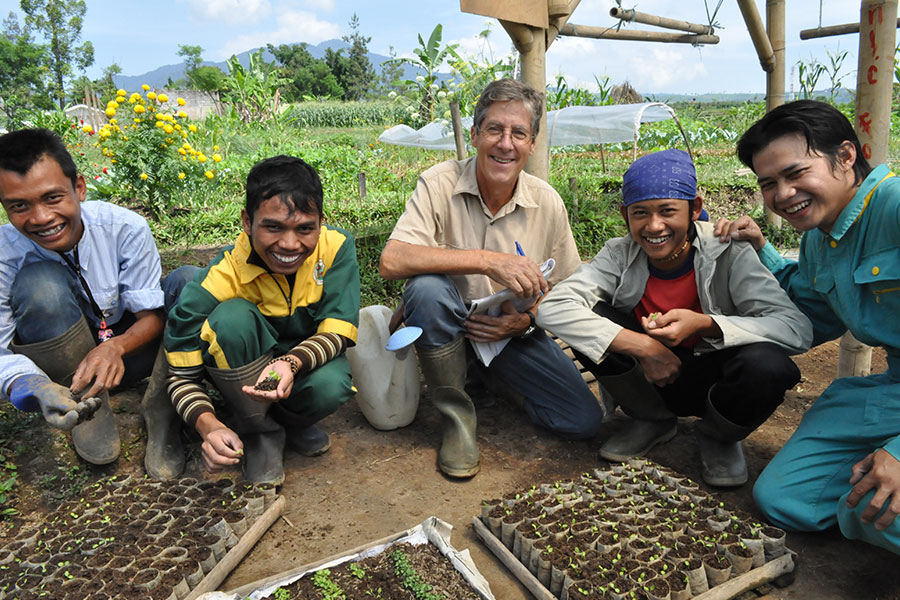 We have been blessed to have made meaningful connections that last for years - even decades - and counting. Meet Kym Hall, our dear friend and volunteer, who continues to be a big part of YUM.

Ever since we started our work, it has always been about the people. But it is not only about the people we serve, it is also about each and every single person and organization we come in contact with, be it donors, partners, volunteers, or employees. We have been blessed to have made meaningful connections that last for years - even decades - and counting. One of these relationships that we have and cherish to this day is with Kym Hall, or as we call him “Pak Kym”.

In 2000, we met Pak Kym through the Australian Volunteers Program and have remained in contact ever since. Recently, we caught up with Pak Kym to hear about his involvement in the establishment of the YUM Organic Farm and the relationships that were formed since his time with YUM.

Read on as Pak Kym recounts the story… In the year 2000, I was at a turning point in my life and I wanted a change. I became aware of the Australian Volunteers Program, an organization which recruits volunteers for partner organizations in other countries. While I was on assignment at Banda Aceh, my manager felt I would be better working at YUM, which was looking for a horticulturist. In April 2010, I moved to Cipanas. I worked there for 6 to 7 months.

When a volunteer arrives at an assignment, they're like a new child in a classroom and I had such a lot to learn. First of all, I needed to build relationships with those who worked at YUM in Cipanas, and the towering strength of those relations was Pak Samsul, the Program Manager. Pak Samsul wasn't the farm manager but he oversaw the activities of the farm team. Within the farm team there was Mas Oleh and his team of people. I needed to build relationships and try to understand what they were hoping for in the future development of the farm. Fortunately, Mas Oleh is a very good horticulturist and he was very motivated in where he wanted to be.

The farm used to be a rice paddy area (sawah). In between each of the areas of land, there was only a narrow embankment (or a bund as we say in English). It was quite difficult to walk from one end of the property to the other without slipping and falling in. So we decided to plan a series of paths through the whole property by using small stones and pebbles, which we took out of the land itself.

The other thing we need when we start a farming activity is water. Without irrigation, you won't have any success. Even though there was a lot of water available on that property, there was no easy way of getting it onto the land where it was needed. At the time, the team was using a watering can dipped into the gutter that ran through the property and pouring the water onto the bed. If we kept doing that, most of the effort and the labor would have been consumed by having to water. So, we needed an irrigation system.

Because there was plenty of water coming down the road into the farm, we dug a dam. We put it in a suction pipe and connected that up to a network of pipes that went to every point in the farm. If you walk in the farm today, you'll find a tap in almost every area. All that sounded very simple, but it really worked. As the farm became more sophisticated and there were greenhouses built, you'll see that there's a tap in each of the greenhouses. Challenges and working toward organic certification

For any volunteer working in a country other than their own, the language becomes a communication issue. Pak Samsul helped in meetings, acting as a translator, and he and I became good friends. Mas Oleh doesn't speak a lot of English, however what we had in common was horticulture - in growing plants and vegetables - and for that, we talked the same language.

I think getting a farm in order never stops. There's never a cut-off period where we say we've done enough development. It will always grow - to this day. Talking to Vanessa, YUM’s Executive Director, about the organic certification, it's the next change that's going to happen to the organic farm. I believe that the organization knows how to produce the product, organically, now they need the recognition for that expertise and to develop the market.

The very first students interning at the farm There's one area that I think is very significant for the farm and its development and progress. I went with Pak Samsul to visit two of the high schools in the area which had agricultural studies and where their students needed a place to do their internship. YUM Cipanas had the facilities and though it wasn't my initiative, I wanted it to be successful. The idea was to have 5-10 students come to the organic farm for three months, working on the farm and also learning about organic farming. I thought there was a lot of benefit in this, however we had never done it before and I wasn't sure who the trainers were going to be and what the curriculum was going to be. Mas Oleh and I worked on a rough curriculum that they could work on and the points that they needed to educate these students. Mas Oleh has a meeting with the interns every morning, and that continues until today. He tells them what he wants them to do then the team members would show the interns how to do it. This is a fairly rare achievement, because the farm went from a food-production unit to a practical school of horticulture. The students absolutely loved being there. I met with some of the headmasters of the high school and the agriculture teacher who brought the students there and there were smiles all around. Subsequently, the farm also hosts international students from Jakarta and Singapore to do their social science placement at YUM. These were really big success stories in my opinion. Not very many farms or enterprises in Australia could pull this off in such a successful way. My assignment was for 7 months and I returned to Australia and started to work in Melbourne. When my first annual leave became available, I returned to Cipanas to do the monitoring evaluation report that was required by YUM and Australian Volunteers Program. However, I've returned quite a few times, probably a dozen times over the last 12 years, informally. Now that we're out of COVID, I would love to return and spend some time with Pak Samsul and see the farm again. I miss the people and the friendships, but also, I miss knowing what's happening or how it's going.

Today, Mas Oleh is the head of the farm and Rohani is the nursery manager producing the seedlings. These people are good, honest, hard-working people with a good heart and they have a good spirit. I think of the YUM Organic Farm as a reputable training organization, delivering community benefits in all of the programs that they have. For example, when Oleh needed a bigger team, he would recruit local farmers, mostly from families in need, as daily workers.

I can say with all confidence that I got more out of it than them. I know we value each other's friendship but I've got a tremendous amount out of it. I can't imagine my life without having some continuing connection with YUM and the good work that they do.